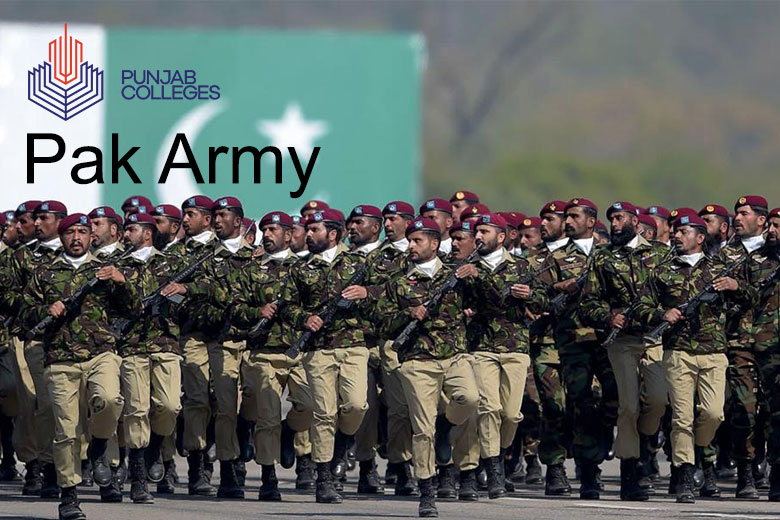 With the emergence of Pakistan as the independent country in 14th August 1947, Pak Army came into existence and took charge of defending Pakistan against all the threats of war and aggressive actions by enemy countries. Its main purpose is ensuring the national security and unity of Pakistan with a selfless attitude. It is the land of the soldiers who eagerly fight and defend their countries and are ready to serve the nation wholeheartedly.

They are fearless and ready to sacrifice their lives for the sake of their beloved land. They aim to become a martyr by sacrificing life in jihad during the war against the enemies.

With such zeal and zest, every brave man wishes to become part of the it to experience the great adventures, challenges and opportunities. Soldiers do stand out amongst all. All of them come up with incomparable passion in the field.

How to Join Pak Army?

It is a place of dedication, passion and selflessness where the men and women with high spirit can join and survive. Interested candidates can apply for any position e.g. Captain, Soldier, Medical Cadet, Civilian, Commissioned Officer, AFNS (Armed Forces Nursing Service) according to the studies and requirements and experience. Ranks in the field raise based on performance and results after putting a great effort. Pak Army holds another world within.

Eligibility criteria may vary following the courses and the ability of the one is joining.

All citizens can apply in long courses except for the women candidates who can only apply for short courses as for a doctor, engineer, software engineer, psychologist and nursing. Openings and posts change after few months based on requirements.

The required age for students who have passed their matriculation or intermediate (FA or FSC) and want to join must be between (17-22) years. They must have obtained 60% marks or the candidates from specified areas must appear with 55% marks along with their domicile.

The candidates with the degree of Masters, MBBS or MBA are eligible in the age of 28 years.

All the candidates who are interested and are eligible may apply online on the website https://www.joinpakarmy.gov.pk/ and complete the registration process. After that, the candidate will be called for an initial assessment of subjects like Maths, English, Pakistan Studies and General Knowledge. On passing the test, the student will move forward for a medical test.

On clearing the medical test, the candidate will appear in ISSB (Inter-Services Selection Board) which is a formed committee who selects the candidate based on his aptitude, ability and passion. The candidate undergoes a Psychological Test, Outdoor Activities to see the physical strength and interviews. Following are four ISSB offices where the candidate can go for test, Kohat, Gujranwala, Quetta and Malir.

Once the ISSB has been passed, the next step is to join the Pak Military Academy for officer’s training that is located in Kakul.

Since Pakistan has the largest military force around the world, it is based on two distinctive structures; operational and administrative.

Operational level Army is divided and formed into 9 corps (each including an independent signal brigade) and two corps-level formations (Air Defence and Strategic Forces) assigned the responsibility of specific areas that cover the mountain ranges of the north to the desert and coastal ranges of the south. Forces are spread all around the sensitive areas and stay alert 24/7.

Corps usually perform in the division of two groups commanded by Lieutenant General.

The division is comprised of three brigades including infantry, artillery and engineers commanded by a Major General. Except for the mountains division each division has got one or more than one armoured brigades.

Brigade typically comes with three or more than three different battalions and are commanded by a Brigadier. Brigades also perform without divisions consisting of battalions independently.

The battalion is comprised of around 6-900 soldiers who are commanded by a Lieutenant Colonel. The number of battalions depends on the type of subunits.

All the honourable posts come after Chief of Army Staff (COAS) and everything is reported to him on high priority while the intelligence and directorates receive commands from Chief of General Staff (CGS).

Leadership in the Army:

Nothing in the world is possible without a good leader who can streamline and ensure the implementation of the right things.

General Qamar Javed Bajwa, is one example who has kept the Army forces united and keep a strict check on all the functions, strategies and operations. That is why the Pak Army is known for its unbroken principals

The right guidance on right time is something that firmly holds the traits of Pakistan’s Army forces make them distinctive in the world.

Army’s rules and regulations have been unbroken and set to be implemented necessarily by all soldiers and even the other citizens where needed.

Pak forces have been stick to the rules ever since. People who join tend to become firm and civilised personalities with time. People associated with this pride receives respect and honour from all over the world and has got a higher rank in the world in terms of manpower.

Soldiers’ passion and compatibility are unmatched and they are highly in demand.

Joining the Pak army means joining the nation’s pride and become a respected figure for the country.